Happy Friday, y’all! Its an especially great FGF because…..:

That’s right! Its my birthday! I plan on eating a ton of food and binge-watching Netflix to my heart’s content. But don’t worry! I also found some awesomely nerdy goodies for you!

I am a big fan of GoldieBlox–toys that help girls master basic engineering principles–mostly because I really want Huff the Tot to be interested in math and science. So while shopping at WalMart, I was super psyched to find this!

Its a new line of toys called “Roominate“. Each set comes with pieces to construct a dollhouse, as well as a kit to light up the room! Each set is different, but its basically like a Snap Circuits kit that also lets you build stuff! I love it!

I’m a BIG fan of board games. Mostly trivia games because I’m really good at them (as long as they’re about pop culture). When I saw this in a magazine, I immediately added it to my Christmas list!

The name of the game is Pop Stream and its a pop culture junkies dream!  According to Parade.com, this is how it works: “Watch hundreds of real movie clips stream on your tablet as two teams go head to head in this game of cinema smarts!”

One of my favorite indulgences is wallets. I probably have about 20. (I know; hoard much?) But anytime I see a whimsical wallet, I just can’t say no! I’m pretty sure this billfold from ThinkGeek will be my next one! 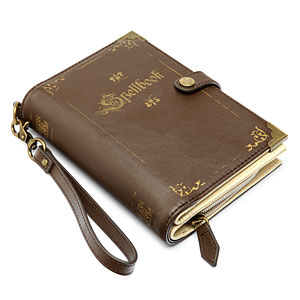 Designed like a Spellbook, this bibliophile’s billfold has multiple compartments for your Muggle money, as well as credit cards and pictures!

I really wish I would’ve found out about this next item a few weeks ago so it could have arrived on my birthday!

What’s the next best thing since sliced bread? Sliced chocolate of course! These yummy slices of chocolate come packaged like cheese here in the US but taste even better! Seriously, how great would it be to add one of these to your next pb&j?!