Here at the Huffman House, we love all things geeky: Star Wars, Star Trek, Doctor Who, Settlers of Catan….you name it, we love it. Also, Huff the Hubs is a HUGE Batman fan, which has made me a Batman fanatic as well. I mean, I’ve always liked Batman as much as the next girl; I even watched the animated series as a kid. But ever since he introduced me to Arkham Asylum and Arkham City, I can’t get enough of the Batman universe.

And it’s not just the caped crusader that I love. I even have some affection for the baddies; mostly Harley Quinn. She’s the hopelessly devoted girlfriend of The Joker with the straight-from-the-1950’s Jersey accent. SHE. IS. AWESOME.

So when I heard of an all-new stage production called Batman Live, I was a little conflicted. Yeah, it’d be cool to see, but won’t think basically be like Sesame Street Live only with Batman? I assumed it’d be something my super hero loving nephew would like, but probably not Huff the Hubs.

Then, we saw the preview.

I showed the hubs and said: “We HAVE to go to this!” So, we looked at the days and times (and chose the showing we assumed there wouldn’t be as many children) and today’s the day! We’ve been waiting for this since the middle of the summer and I feel like a little kid about to go to the circus!

Seeing as how this is as close to a con as we’ll get, since San Diego is so far and there aren’t any on the horizon here in Oklahoma, I’ve been a ball of anxious fangirl energy all week. It’s really all I can think about (well, that and Vampire Diaries. Did you watch last night?!).

I’ve even laid out our outfits for tonight. 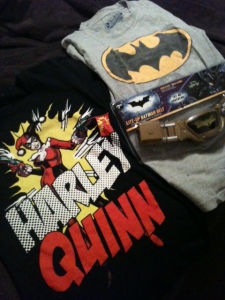 I bought the Bat belt last year on the day after Halloween. Hubs’ is still in the package, but my nephew LOVES his! I’ll be sure to update the post later and let everyone know if it was cheesy or mind-blowing.

In the meantime, hold on to your capes. The Dark Knight is about to take the stage!

Update: The show was AMAZING! There were a few parts that were a little cheesy, but for the most part, it was awesome! The guy who played The Joker was spot on with his voice! Harley Quinn too! She was really the star of the show (of course, I’m a little bias). If you have a chance to see it, DO IT.