This weekend, my sisters and I walked did the Roger Rabbit down memory lane.

(Back story: When we were in elementary school, we all got straight A’s. Because of our awesomeness, my parents bought us all tickets to see New Kids on the Block. You have no idea what this meant to a bunch of NKOTB-crazed, pre-adolescent girls.

This past Saturday, Samantha, Bridget and I had tickets to The Package Tour (I found the name of the tour highly inappropriate. But that’s because my mind is in the gutter. Anyway…). The tour was: Boys II Men, 98*, and New Kids on the Block. Yes, you read that right. All of these groups are still touring and making music.

I’m not going to lie; I was a little worried that the years would not have been good to the guys and that someone was going to break a hip before the night was through.

When we finally got to our seats, the excitement in the arena was palatable. The DJ was awesome, spinning music from our “old school” days (its pretty awesome when an entire arena of people start rapping Ice, Ice, Baby in unison).

Before B2M came out, a video played on the screen. The words said: 133 Weeks at Number One; 9 Grammy Awards; 5 American Music Awards; The Highest Selling R&B Group of All Time. Then, the lights shone down on the guys and the decibel level was off the charts. Bridget started freaking out, making me think back to when we saw Johnny Depp at Comic Con (when he walked out she said: “Oh my gosh, I’m sweating!”).

The guys still sounded AMAZING! They were super high energy and really got the crowd ready for the next two acts. They made me all nostalgic; thinking back to my skating rink days, couple skating with a cute boy. (The stuff raining down from the ceiling in the video is rose petals. Each one of the guys had a dozen single roses they passed out to fans).

When B2M left the stage, Bridget leaned over and said: “Even if we left right now, this would be the best night EVER!” Soon after, we noticed a light shining on the stages that read: 98°

Again, the screams were deafening.

When the guys came out on the stage and Nick Lachey smiled, I swore I heard the audience collectively sigh in admiration. Samantha leaned over to me and said: “He’s so much hotter in person!”

I didn’t know all of 98° songs, but I knew the ones that were played over and over in the summer of ’97. At one point, Hottie-McHot Lachey said: “Man, Oklahoma summer’s are HOT! Mind if I take off my shirt?” And again, I was waiting for every woman in the arena  to pass out. Then, each guy went out into the audience and picked a girl (I seriously thought Bridget was going to pull a Gimli and ask me to toss her down to the floor). They brought each girl on stage and serenaded her with I Do {Cherish You}.

The fourteen year old inside me was swooning hard core.

After 98° finished their set, the house lights came on and we waited with furious fangirl excitement. When the lights went dark, we all screamed until we were hoarse. As the light came up, I felt like I was a kid again.

Each one of us–me and my sisters–had/have a favorite New Kid. Sam’s was/is Jordan, Bridget’s was/is Joey (or “Joe” as he goes by now) and mine’s Donnie. As the spotlights came up on each guy and a close up was shown on the screen, each one of us took our turn swooning. (Poor Danny and Jonathon, they don’t get any love from the Akers’ girls.) 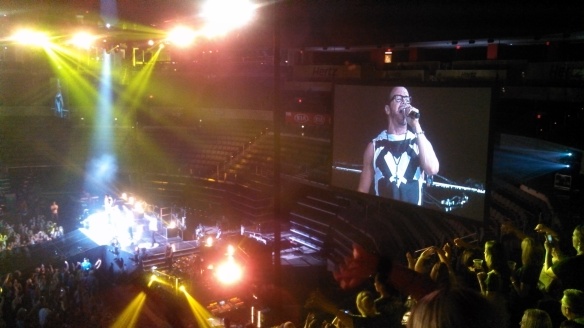 They started out with a few songs I didn’t know and then finally got to Summertime, their first hit after coming back from the dead. Then, it got real.

They went straight into Step By Step and The Right Stuff. When they all did their signature dance, the women in the audience lost their religion.

This concert was unbelievable! The guys still sound great and can move like they did back in their teens! Even though it looked like Jonathon was SUPER nervous (he has crazy stage fright and even walked off the stage at one of their earlier concerts in this tour) and wasn’t putting as much heart into it as the other guys, they still did wonderfully. (Jonathon eventually seemed to warm up to the crowd and even went into the stands and hugged/took pics with fans).

Their last song was the one I had been waiting for all night. Donnie started to talk about how their home state, Massachusetts, and Oklahoma had had a rough year. What with the Boston Marathon bombing and multiple tornadoes, we all felt like we had been put through the ringer. However, Donnie said: “We all knew what to do…Because we’re tough.”

Then they all threw on Boston Red Sox jerseys that said “Boston Strong” on the backs and started in to Hangin’ Tough. Be still my heart.

Some of my favorite quotes from the night were:

“Abs must run in the family!” (Bridget, when Donnie took his shirt off)

“I think I may go into premature labor!” (Me, referring to NKOTB)

“He just gets better with age!” (Samantha, whilst drooling over Nick Lachey)

“I cannot stop smiling!” (Bridget, during every performance)

“Did that just happen?!” (All three of us, after Donnie Wahlberg totally made out with a chick from the audience)

“BEST. CONCERT. EVER.” (Samantha and Bridget as we left the ‘Peake)

It was, by far, one of the best concerts I’ve ever been to. If I would’ve known it was going to be THAT good, I would’ve bought floor seats; no matter the price. Plus, it was such a blast to get to hang out with my sisters, just us 3, and jam and swoon to the groups of our youth.