With the 2016 Olympics kicking off in Rio tomorrow, I thought that this week’s Her’s Day Thursday leading ladies should be none other than #TeamUSA Olympians!

The 21-year-old Canadian-American swimmer may be young, but the girl has already achieved so much in her swimming career! She has won FOUR Olympic gold medals and has set FOUR world records! Not only that, but Missy credits her faith for her success:  “God is always there for me. I talk with Him before, during and after practice and competitions. I pray to Him for guidance. I thank Him for this talent He has given me, and promise to be a positive role model for young athletes in all sports.”

You are definitely a role model, Missy!

Another awesome athlete that is kicking butt and taking names: Claressa Shields!

Claressa is giving the one-two-punch to folks that think girls can’t dish out KO’s. Claressa was the first woman boxer to win a gold medal while competing at the 2012 London Olympics! Out of her 75 total fights, Claressa has only lost ONCE. ONCE! Get it, girl!

There was a time in my life that I thought I might try a triathlon. That was s short-lived dream. I’ll leave that to the pros like Gwen Jorgensen!

Gwen competed for Team USA at the 2012 London Olympics and is back again to bring home the gold from Rio! Gwen is a total BAMF, running a personal best of a mile in LESS than 5 minutes (my PB was 9 minutes!) and the 3,000 meters in less than 10 minutes! Not only that, but two years ago Gwen finished first in FOUR consecutive triathlons! Who run the world? GWEN!

Gymnastics has always been my absolute favorite Olympic sport to watch (with swimming coming in a close second) and I am super excited to watch this young lady take the beam! 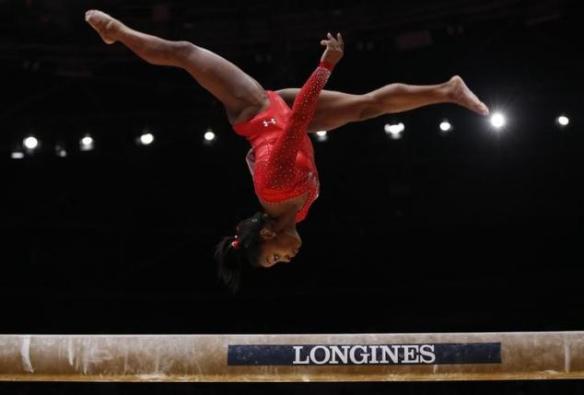 The road to the Olympics hasn’t been an easy one for Simone Biles. Her mother struggled with alcohol and drug addiction for years and she and her siblings were put up for adoption when the courts realized Simone’s mother could not care for them. Thankfully, Simone’s grandparents stepped in and took Simone and the kids in. Not long after that, Simone’s grandfather recognized his granddaughter’s talent for the sport and the rest, as they say, is history. Now, Simone holds 14 medals–the most of any female gymnast in America’s World Championship history–and has her eyes set on the gold for this year’s Olympics! Stick that landing, Simone!

Any athletes you’re excited about seeing represent girl power at this years games? Share in the comments below!