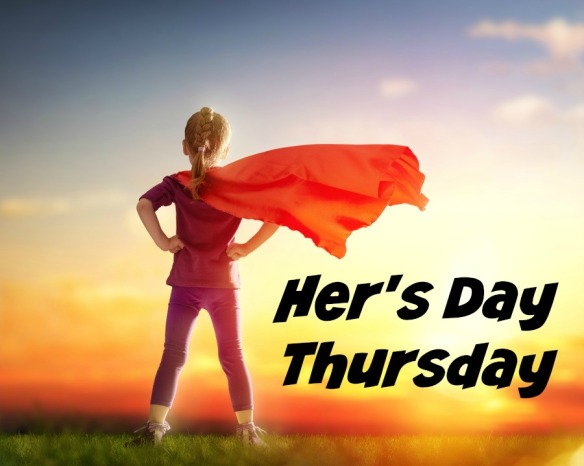 With Comic Con kicking off in San Diego yesterday, I thought it would be fun to talk about some of my favorite female characters from the various fandoms I love! And let me tell ya, not all women in geekdom are leather-clad eye candy. 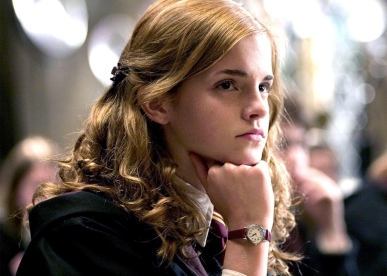 This book-loving Muggle-born will forever be my favorite character from the Harry Potter universe. Hermione was always the one to tell Harry, Ron, and everyone else to rise above the foolishness that Draco and his cronies were always spouting. She used her brain (and brawn when necessary) and founded S.P.E.W. (The Society for the Promotion of Elvish Welfare). Hermione is a fierce female and I’m proud my kid is named after her! 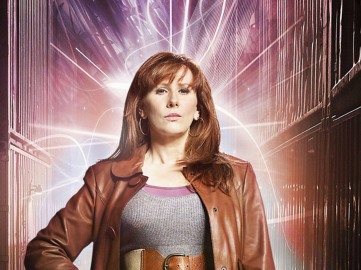 Nobody–not even Donna herself–thought she was anything special. But, as it turns out, Donna was “the most important woman in the whole wide universe”. After just one trip with the Doctor, Donna was forever changed. She knew something was amiss with the Adipose company and took matters into her own hands, investigating and eventually teaming up with her favorite Gallifrean! Donna traveled the universe and kicked butt during all of her adventures and also fought for the rights of others!

Aside from the whole “dangerously-close-to-TwilightI-level-love-traingle”, Katniss is a total BAMF. True, homegirl probably needed some therapy after all of the tragedies she’s endured in her young life, but its not like Panem had healthcare. Anyway, she worked hard to provide for her family after the death of her father, fought bravely in the Arena (TWICE), and basically rescued all of Panem from the hands of yet another dictator. The Mockingjay lives, y’all! 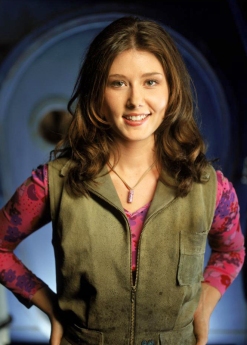 Kaylee is not only a sweet, cheerful, down-home girl, but she can fix basically anything with an engine faster than you can say: “No power in the ‘verse can stop me.” Kaylee loves her shipmates on Serenity so genuinely and fiercely loyal to her captain and beloved ship.

Do any of these ladies top your list of favorite fandom females? Who’s YOUR favorite character? Share in the comments below! 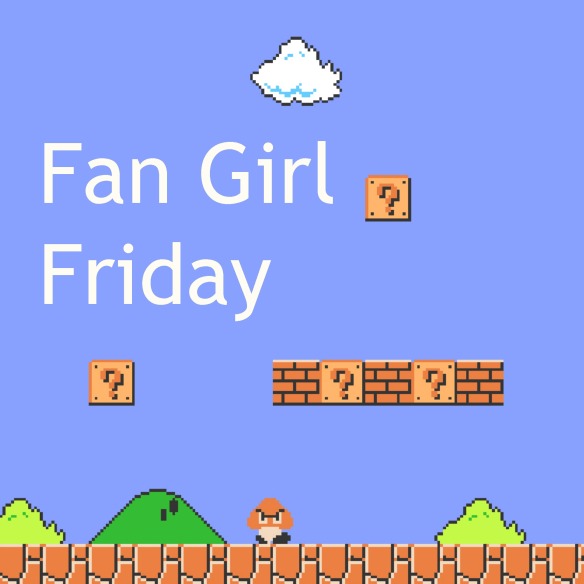 Happy Friday, peeps! Christmas is getting oh-so-close and I’ve got a gaggle of geeky goodies for the nerd in your family (or for you)!

For the Gilmore Girl lovin’ gal in your life, Funko is releasing GG characters! Including this adorable Lorelai pop figure! 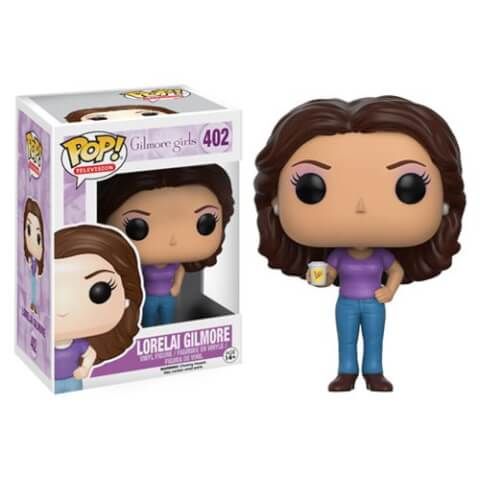 Sadly, they won’t be released until January 2017, BUT you can always tell your pal its “in the mail”!

For the one who is constantly quoting Jayne Cobb: “You’re beginning to damage my calm!” Grab this stress-relieving Firefly coloring book from Think Geek! 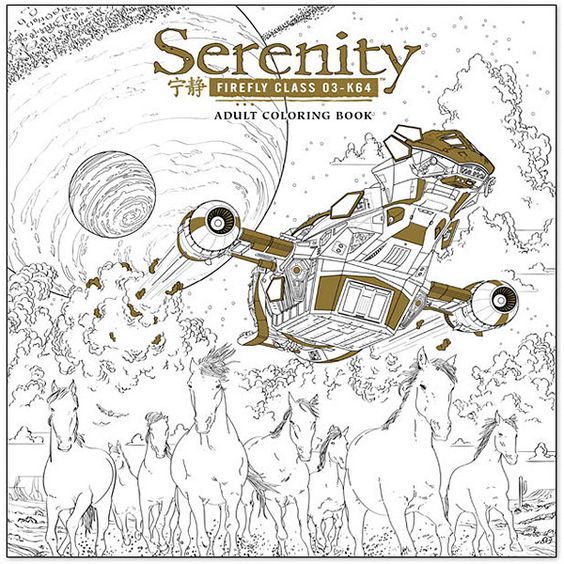 This awesome book is full of characters from the beloved series and film!

For your Upside Down-obsessed friend, check out this Stranger Things swag from Hot Topic: 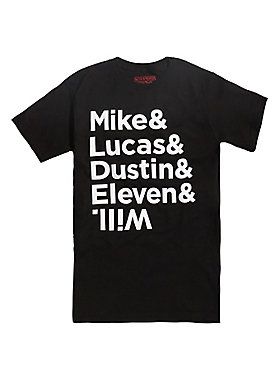 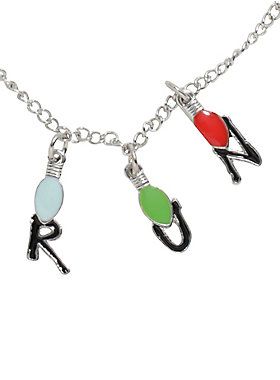 Bonus? The multipurpose tool and  bracelet has Christmas lights so you’ll be in the holiday spirit all year round! 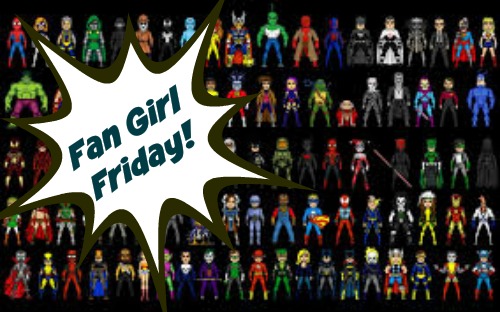 Its official: we’re halfway through January. And, already so much has happened! I couldn’t bring myself to write a blog post yesterday because I was so torn up about the passing of Alan Rickman. Though I bleed the red and gold of Gryffindor House, I think we can all say that, right now, we’re all Slytherins.

The passing of such a great actor and the man we’ve all come to love as he portrayed one of the most misunderstood characters in the HP universe, has really left a hole in so many people’s hearts. 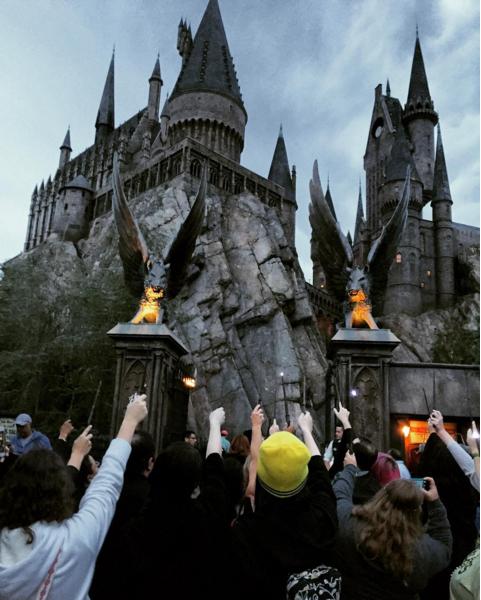 And inside, a single lily was placed outside of Snape’s potion’s classroom: 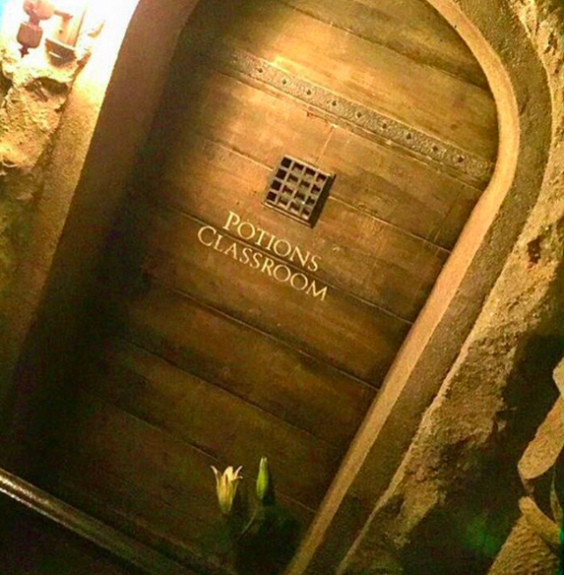 Rest in peace, Alan. We will always remember you.

Now, I’d like to switch gears and show you some delightfully dorky deals I’ve found to brighten your mood!

Over at The Geeky Hostess, there’s not only recipes but there’s also one-of-a-kind finds sure to bring a smile to your face! Like this ah-may-zing three-pack of fandom teas! 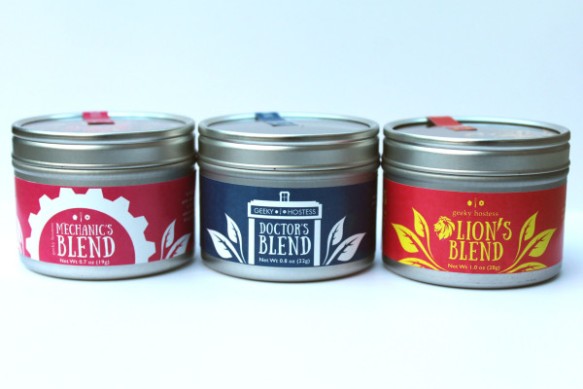 The 3-pack includes Mechanic’s Blend (Firefly), Doctor’s Blend (Doctor Who), and Lion’s Blend (Gryffindor/Harry Potter)! I’m a part of all three fandoms so this is PERF for me! (Hint, hint, Huff the Hubs!)

Huff the Tot hasn’t worn bibs in a loooooong time (though, she–and I–probably should!). But soon, we’ll be adding to our brood and we’ll need to dig those things out of storage. But, I think I may buy a few of these, just to keep those meal time messes humorous: 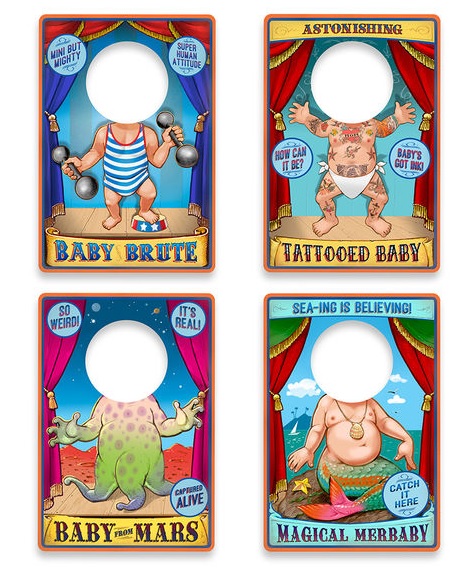 These silly sideshow bibs not only protect the kiddo from messes, but also help you have pictures that will no doubt embarrass them in the future! Its a win-win! Ha!

Even though I work from home, I know how it can be working in an office. Some days, you just do NOT want to make small talk with people. And, there’s really no way to let people know this without coming off as a jerk. So let your mug do the talking for you! 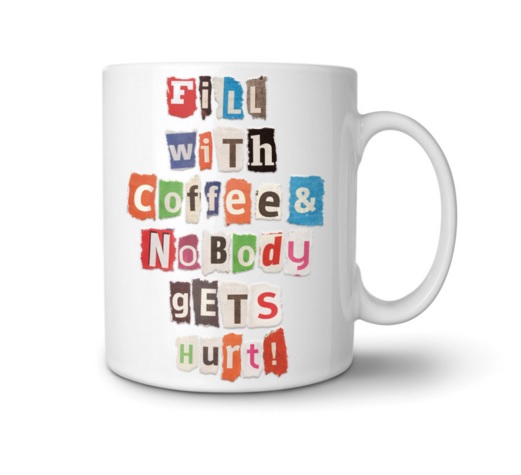 This mug from Fred Flare comes with re-positionable letters so you can let your coworkers know when you’ve finally had enough coffee to make it through 10 minutes of chit-chat!

Have a fandom find you want to see on FGF? Share in the comments below or hit me up on Twitter: @thehuffmanpost !

Iiiiits Friday! Start your happy dance and let the Diet Coke flow! I’ve got some fantabulous fangirl finds to make today even more like a party!

Even though Firefly is long gone (I know, try not to sob into the tassle’s of your Jayne replica knit hat) you can still live the renegade lifestyle ONLINE! Oh yes, that’s right, Firefly is coming to your PC AND smartphone! You can carry Serenity in your pocket! 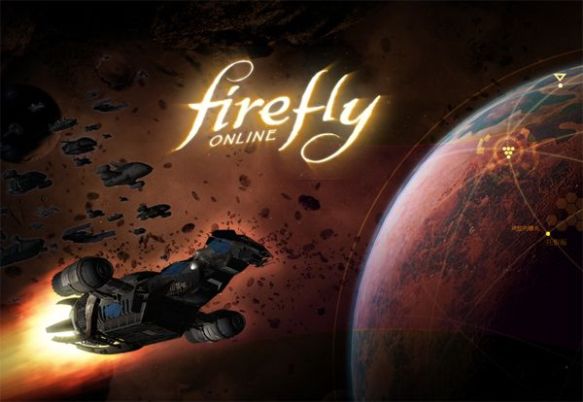 Even though it won’t be available until early 2015, you can check out a sneak peek of the game by clocking the link here. What do you think? I think its SHINY.

I’m not going to lie, when Andrea from The Walking Dead was killed off, I was like, “Sheesh! FINALLY!” Needless to say, I was not the biggest fan of her character. I know I can’t be the only one. Anywhoo, Laurie Holden, the actress that played Andrea on the show, is MUCH more likeable in real life! 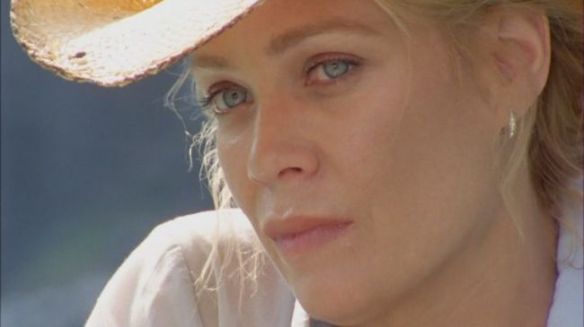 Turns out Holden was an instrumental part in an undercover sex-trafficking bust down in Columbia. Holden is a human rights activist and works with a program called Operation Underground Railroad. The group, led by former CIA-agent Tim Ballard, works to free young girls sold into sex slavery. During the sting in Columbia, Holden and the group helped free fifty-five young women! Go Laurie! You can read the full story here.

I am SO incredibly ready for November: turkey, stuffing, and Mockingjay! I’ve been waiting for any new trailers to be released, so when I saw this one, I squealed like a little girl! Check it out!

Speaking of movies, look at what an incredibly talented teen did–using Lego and stop-motion–to capture some of the greatest moments in cult movie history, as well as classic movie posters:

Oh yeah, it’s FRIIIIIIIIDAY! I’m gearing up for a crazy three-day weekend of sewing, watching the greatest college football team of all time, and reading! #thuglife

But before I dive in to my wild weekend, I have some fun and fabulous fan girl finds to share!
I’m sure you’ve all seen the a-dork-able Funko Pop Vinyl figurines at Hot Topic. So cute, right? Look at what line was just released! 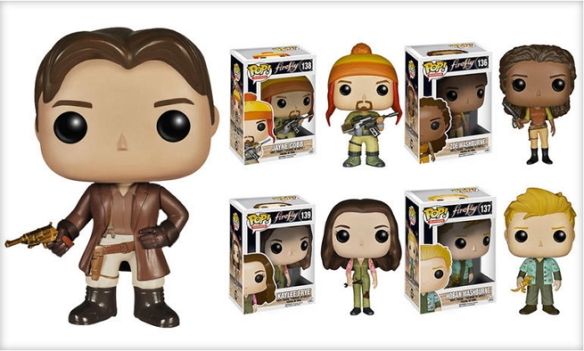 “You can’t take the cute from me.”

It’s the gang from Firefly! Now you can totally recreate your favorite scenes with these cuties! (Funko also recently released THESE!)

I used to be somewhat cynical, but after having a kid, I’ve become so soft (and I’m not just talking about my abs–hey oh!). These next pictures totally made me tear up like a big ole baby!
Holly Spring is the mother of a little girl who was diagnosed with Hirschsprung’s Disease as a baby, leaving her without a left hand. The photographer mom wanted to take some photos of her daughter to inspire her that she can do anything or be anything she wants to be. Check it out: 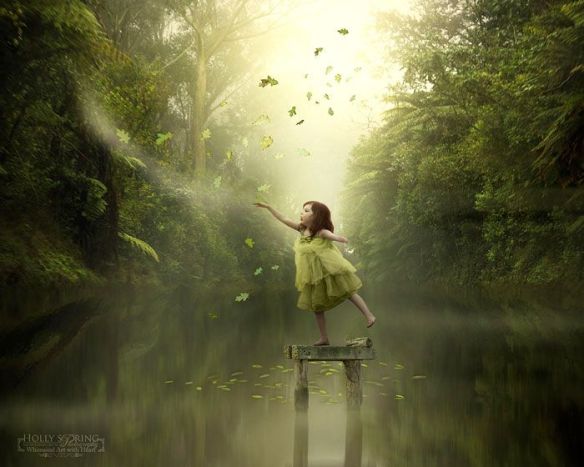 This week, we got some very devastating news. Our favorite Japanese feline, Hello Kitty, we are now being told is not an actual cat! Hear that? That was the sound of my heart breaking. Some folks (ME), however, refuse to accept this. So, at this moment, Hello Kitty is both a cat and not a cat. Sound familiar? You can celebrate this Sanrio stalemate with these cute (and also morbid) Schrodinger’s Cat Earrings from Think Geek! 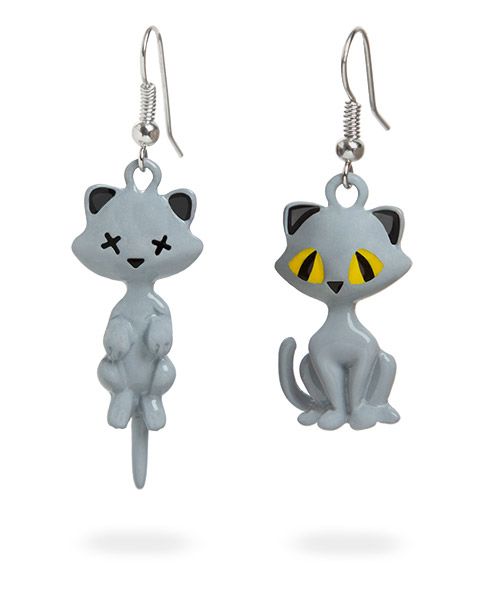 Have a happy (and safe) Labor Day weekend!

Sorry I was MIA yesterday. Hermione evidently swapped places with a howler monkey yesterday because homegirl would Not. Stop. Crying. (And, honestly, neither would I.)

This whole “working-from-home-with-a-baby-in-the-house” thing just ain’t working. Thankfully, my aunt runs an at-home daycare and she said she had space to take the little in a few days a week. Which means I’ll be able to get work done and keep myself sane! Woot!

Now, on to the geeky goodies!

Last week, I watched an awesome documentary: Done the Impossible: The Fan’s Tale of Firefly and Serenity. 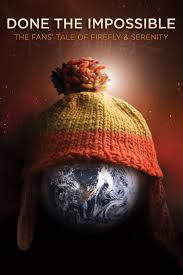 It. Was. Awesome! I was a little late to the Firefly fandom, so there was a lot of stuff I didn’t know about (like how the episodes weren’t played in order or that the fans wrote tons of letters/emails to Fox and begged for it to be kept on the air). It was so cool to see the fans’ passion and dedication to their show! I highly recommend it!

One of my goals this year is to run the full in the Oklahoma City Memorial Marathon. I started training with my sister this week and I think I’m going to need to get these for those early-morning runs: 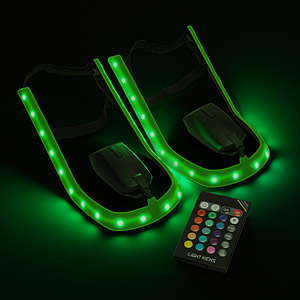 All the other kids in the bright-light kicks…

You can actually change the color and pattern in which they light up!

Have a bathroom that’s smaller on in the inside? Not need to freak! I’ve got what you need! 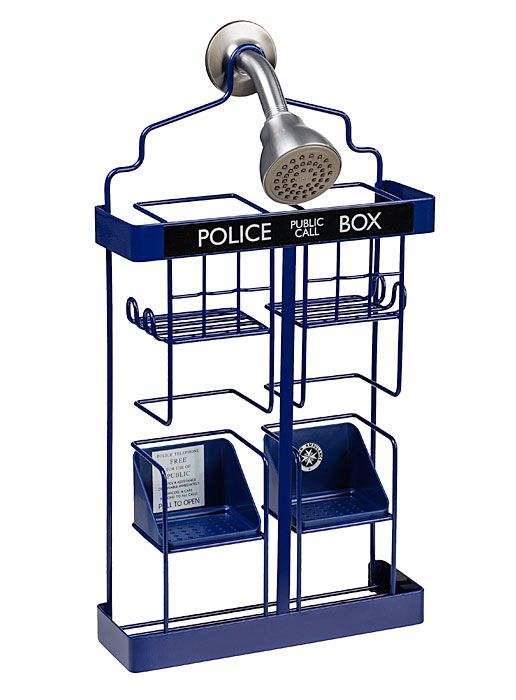 Stay clean during your interplanetary travels!

This awesome shower caddy can store all of your shower schtuffs: shampoo, conditioner, rubber ducky in a bow tie…you know, the essentials!

And speaking of Who, check out this awesome closet I saw on Pinterest! I hope its bigger on the inside! 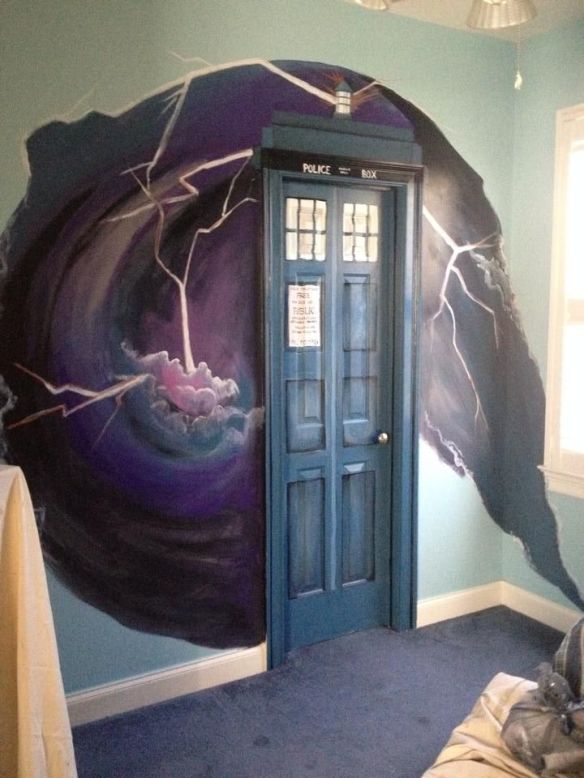 I hope its bigger on the inside!

Ahhh….we finally made it through another week!

Time to feast your eyes on some geeky goodies! Let’s do this thang!

This first find is legen–wait for it (and I hope you’re not lactose intolerant because the next part of this word is)–dary! Kick off your weekend by suiting up in this amazing suitjama set from Think Geek! 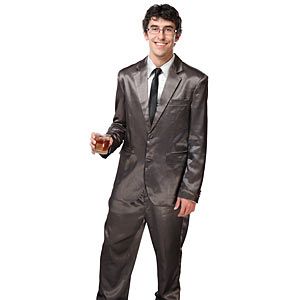 Sleepovers have never been so classy.

Book lovers, unite! There’s FINALLY a game for us to show off our knowledge of authors, their works, and how big bibliophiles we are! This Notable Novelists card game from Fred Flare is sure to jazz up any book club meeting! 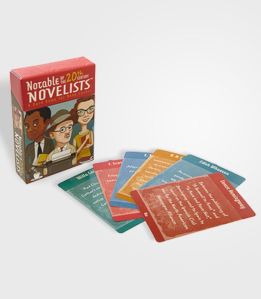 Lately, my Pinterest news feed has been flooding with knitting and crocheting patterns. Unfortunately, I have chubby fingers and zero patience, so I refrain from such activities. However, the other day whilst walking around Michael’s, I saw the most AMAZING book! I think I might have to pick up knitting! 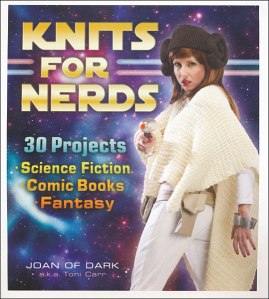 Get yo knit on.

Inside are awesome projects from all of our favorite shows: Firefly, Doctor Who, Sherlock; as well as Star Wars and so many more! (To my knitting friends: get ready to have some orders placed!)

And finally, is anyone else SO excited about the new Captain America movie? Even though I hear Cap and the Black Widow totes kiss (I’m coming for you, Scar Jo; look out!) it still doesn’t hamper my nerd squeals. Check out the trailer that recently debuted online!

Hyperbole and a Half
The Huffman Post
Blog at WordPress.com.