I think I may be hitting the nesting stage about two months late. I didn’t really have the energy to get those nesting instincts during my pregnancy but I am feeling it now. Everywhere I look, I see something that needs to be scrubbed, organized, or de-cluttered (though, this could just be lie with two kids, ha!).

Even though I have a cleaning schedule and every room gets cleaned, there are still those stubborn spots that just refuse to get/stay clean. Like this: 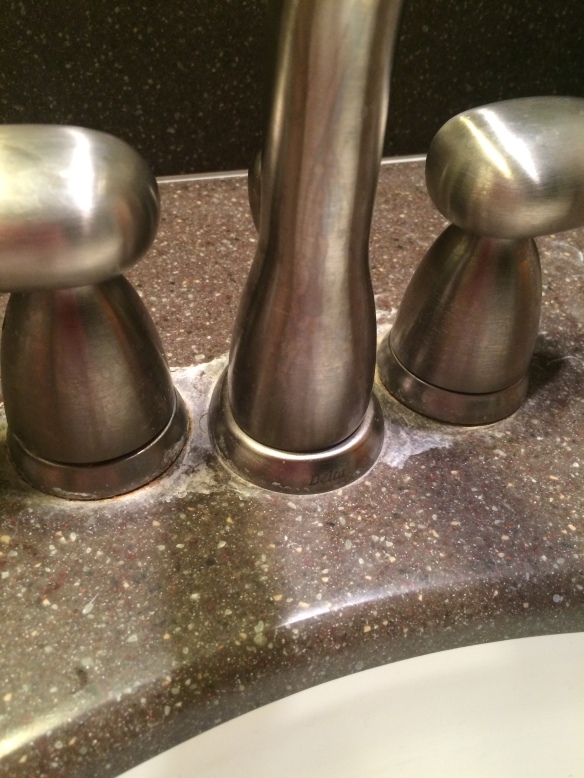 Its seriously EVERY. SINGLE. FAUCET in the house. They all look like that! It grosses me out and is infuriating. I’ve used Scrubbing Bubbles and other cleaners but nothing has helped! So, instead of curling up in the fetal position and crying, I consulted the interwebs. I saw that vinegar is supposed to help break up those mineral deposits. I decided to give it a try.

Here’s what you need: 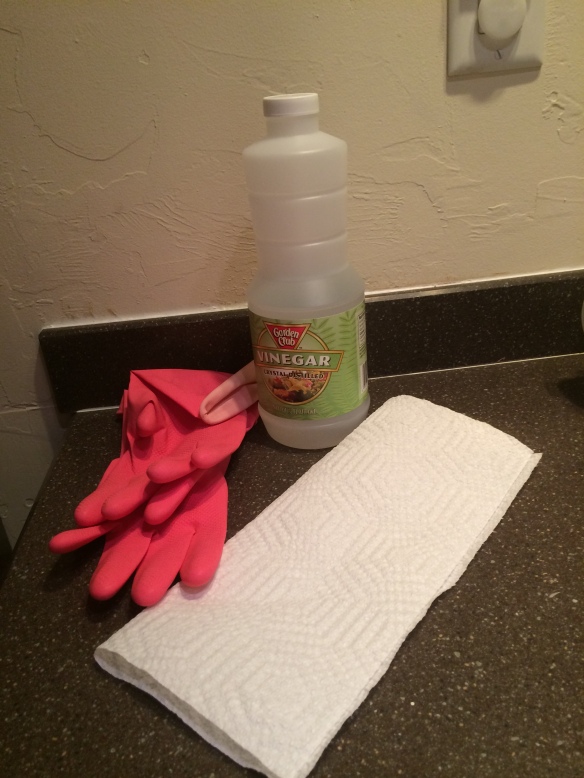 All you have to do is wet the paper towel with a little water and then drench it in vinegar. DO NOT RING IT OUT. Then, roll it long-ways and weave it around your faucet. 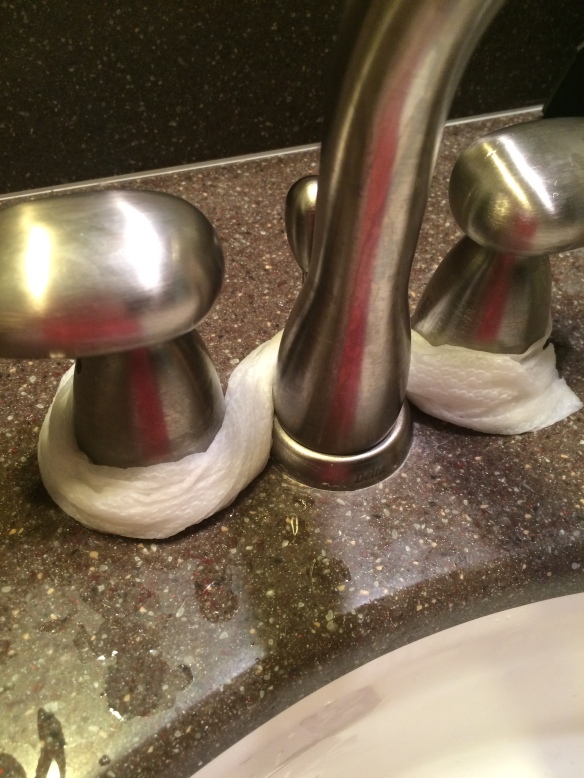 Let it sit for about an hour. Then, remove the paper towel. 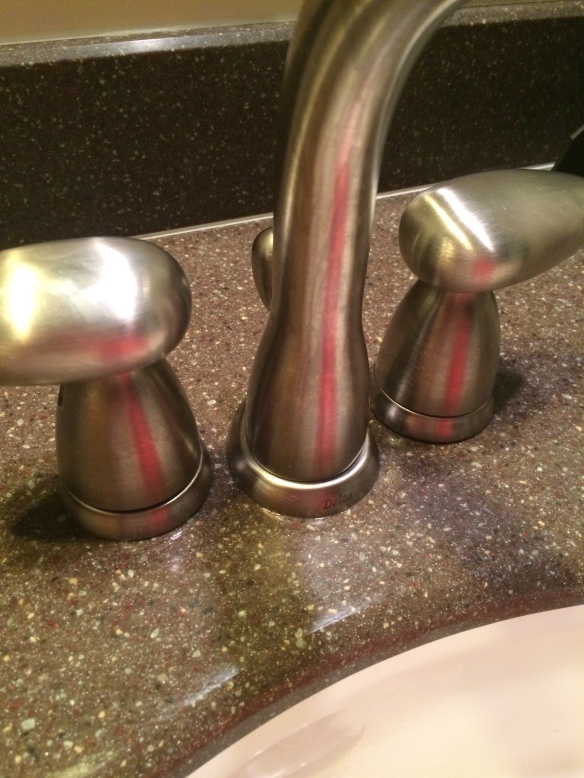 Look how clean it is! Wooo! This is DEFINITELY a Try It WIN! (It should be noted that every faucet in the house has now received the vinegar treatment and my house stinks. But it was totally worth it!)

Now that the holiday season is in full swing, Huff the Hubs and I are not only getting the house “Christmas ready”, but we’re also trying to get the house “everyday ready”. We’re planning on having a housewarming party after the New Year, so that means getting boxes thrown out, rooms decorated, and cleaning. Lots and LOTS of cleaning.

One of the things that drew me to this house was that the awesome stainless steel appliances came with it! I LURVE stainless steel! However, steel does not love water spots. I tried everything I could think of to make my dishwasher and oven door look sparkling clean, but nothing worked. 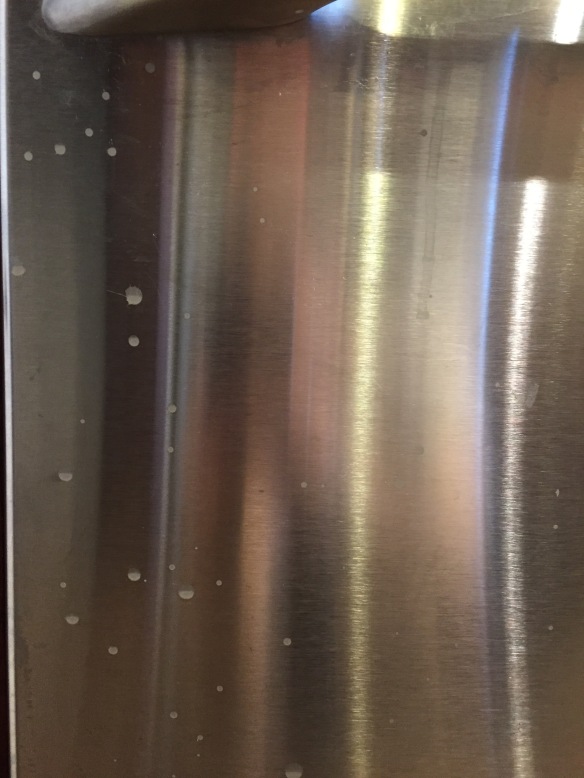 Those water spots have been taunting me. Jerks.

The blogger says that this cleaner will make your stainless steel appliances look like new! I figured it was worth a shot.

Here’s what you need to make the cleanser:

Pour the baking soda into a bowl and then add the vinegar. And, if you’re like me, freak out when you see the chemical reaction happening between the two as the mixture fizzes and spills all over your counter. 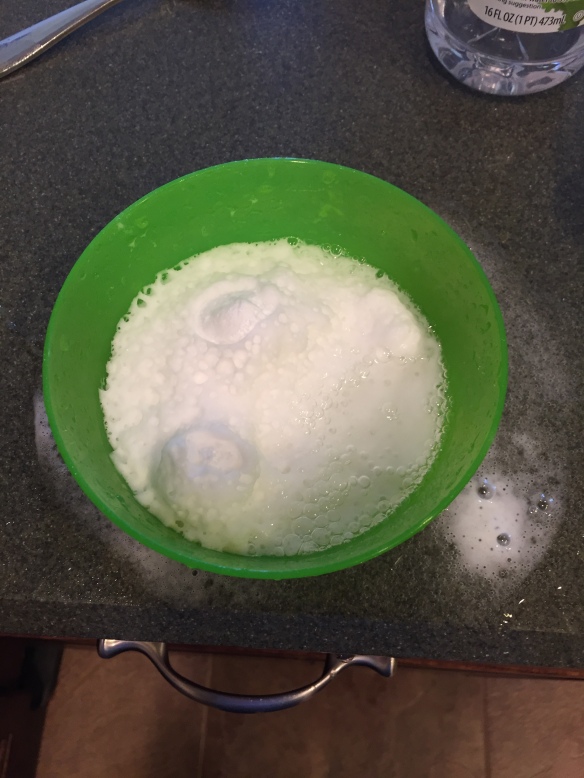 Then, realize you need a bigger bowl.

Add in the oil and lemon juice and mix well until it becomes a paste.

Then, grab a soft cloth and work the paste in circles on your appliance. Let it set for 5-10 minutes. 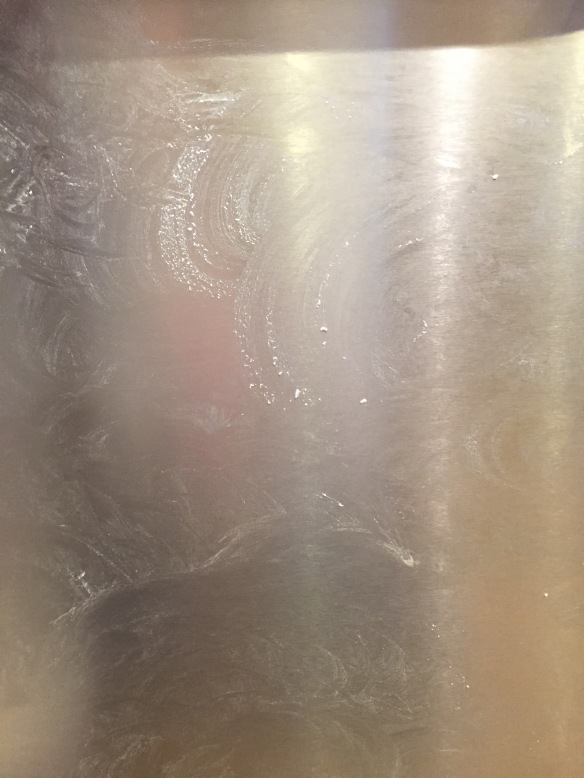 Then, dampen your cloth and wipe off the paste.

Omg, y’all! This seriously made my dishwasher and oven look brand spankin’ new! I couldn’t believe it! It may sound odd to get this excited over clean appliances, but if you could only peek inside my neurotic head, you would see how this has been irritating me for WEEKS!

Have you ever tried this before? Did you have different results? Share in the comments below! 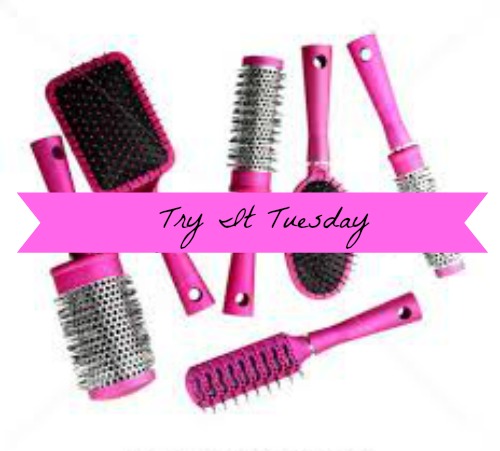 Hey y’all! I’ve been looking at Pinterest and I found a Try It that I think you’ll love!

Sadly, its not edible. BUT, it is super helpful! It is a natural alternative to shampoo!

Here’s what you need: 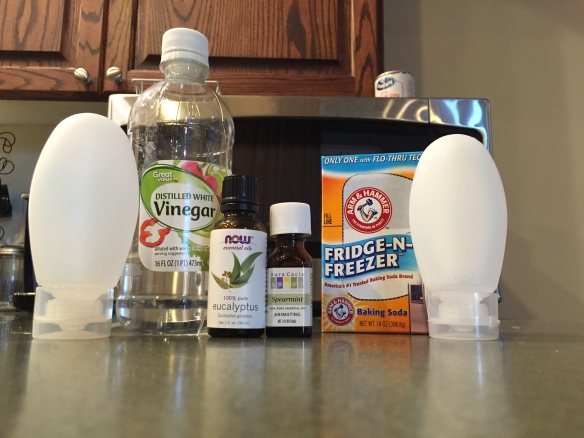 ~Essential oils (not necessary, but comes in handy)

There are two parts to this Try It. One is the “shampoo” and the other is the “conditioner”.

The conditioner is 1 part vinegar (you can use white or apple cider) to 4 parts water. I also threw in 1 drop of eucalyptus essential oil and 2 drops of spearmint just to try to mask the vinegar smell. 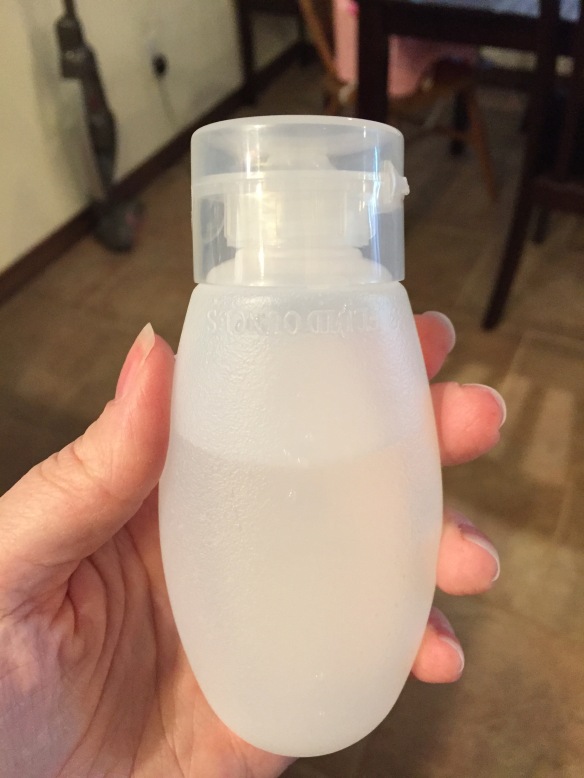 Then, I washed and rinsed my hair. I won’t lie, it was weird not having my hairy all foamy. And the gritty nature of the baking soda made me feel like I was washing my hair with sand. And even though I added the essential oils, I could still smell the vinegar. (It gave me flashbacks to when my mom made us girls rinse our hair with vinegar all throughout elementary and junior high. It was a natural way to protect your hair from lice. My mom had THREE daughters with hair passed their booties; she about had a mental breakdown whenever we got lice from some kid at school. Can you imagine combing 6 feet of hair?! But still, even though it saved us all from the terror of those scalp-scratching bugs, I’d cry every time my mom made me pour vinegar on my head. But, I digress.)

I was still skeptical when I rinsed my hair. I figured I would have to wash my hair again because I knew that when I went to blow dry it that it would be a horrible mess. But it wasn’t! My tangle-prone hair was surprisingly easy to comb through and after I blow dried it, it didn’t look or feel greasy! I really liked it!

Have you ever tried this before? What were your results? Share in the comments below!

Hello all! Sorry about the lame post yesterday… Mondays are crazy. However, today, I feel GREAT! This very well may be the “nesting” energy coming out in me (which, according to the bone-chilling labor video Huff the Hubs and I watched on Saturday, means labor is imminent) but I’m using it for all its worth!

Because of that, you’re getting a Try it Tuesday twofer!

The first Try It comes from my mom! She saw this pin on Pinterest: 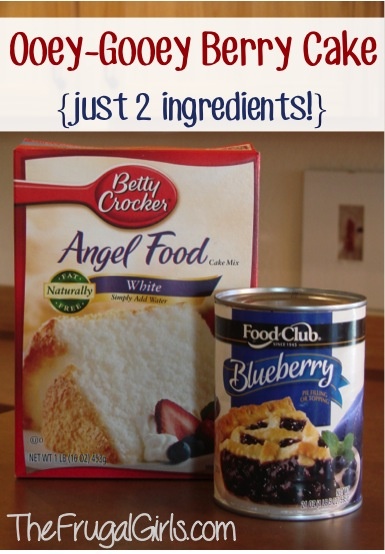 Sounds simple enough, right? Two ingredients, how can you screw that up? (If I would’ve made this, I would have found a way!)

Hope she clipped that Box Top before tossing it in the trash!

After she gathered her ingredients, she mixed them together: 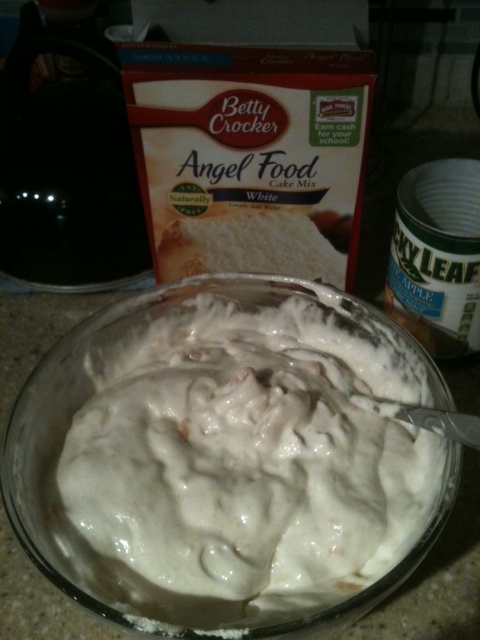 Sorry if its a little dark. I never said Mom was Annie Lebowitz.

It was really yummy! It tasted sort of like an apple pie (but without all the crazy calories!) And the recipe is so simple, you can use pretty much any pie filling you want: blueberry, cherry, apple, snozberry…Whatever you’re in the mood for!

The next Try It was actually a recommendation from my sister, Samantha. I was complaining about how my kitchen dish rags would get so stinky and mildewy after one or two uses. It not only stunk up the kitchen, but if you forgot that it was stinky, you’d touch it and then your hand would smell. It was a vicious cycle.

That is, until, Sam told me something that would change my life forever:

Use vinegar when you wash your towels.

Yep. Vinegar. Its not just for Easter eggs anymore!

She said to use detergent as you normally would when you wash your towels. BUT, get a Downy Ball and pour white vinegar into it, and drop it into the washing machine.

I was skeptical, but I tried it. I was afraid that it would make my towels stink, but after they washed, I couldn’t smell the vinegar (they were even softer!)! After I dried them and put them away was when the real test began.

I used a new dish rag and it lasted over a WEEK and did not stink ONCE! I was so excited! Needless to say, vinegar is a new laundry staple in the Huffman Homestead.

Today’s Try It is right up my alley! I saw it on Pinterest— a magical foot soak that’s supposed to wipe all the dead skin off of your feet! This preggo loves the idea of getting a pedi-like experience for little to no cost! 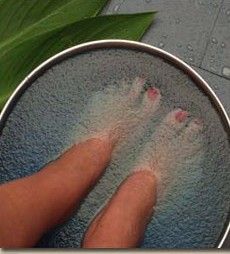 Those aren’t my toes. Mine look like Vienna sausages.

Evidently, all you’re supposed to do is pour 1/4 cup Listerine, 1/4 cup vinegar, and 1/2 cup warm water into a bucket and soak your toesies for about 10 minutes. Then, you get a rag and the dead skin “practically falls off by itself”.

I thought I’d give it a try! I gathered the stuff:

Sure did use the off brand of Listerine!

I mixed everything together and put it the biggest bowl I could find:

I was a little sad that the bowl wasn’t filled up too high. I was concerned that both of my feet wouldn’t soak….I was right:

Even though both of my feet didn’t fit, I thought it’d be okay. This way, I could compare my soaked foot to my unsoaked foot.

After 10 minutes, I took my foot out. The bottom of it was Smurf blue. I grabbed a rag and wiped my foot off. I didn’t really see any dead skin “magically disintegrate”. So I kept wiping until my foot was more skin-toned and less blue:

After that, I compared my feet. Honestly, I thought they felt the same. I may try this one again, with more Listerine and water. I will say it helped my feet feel more relaxed; the Listerine gave my Hobbit feet a soothing, tingly feeling. So I guess not all was lost, right?